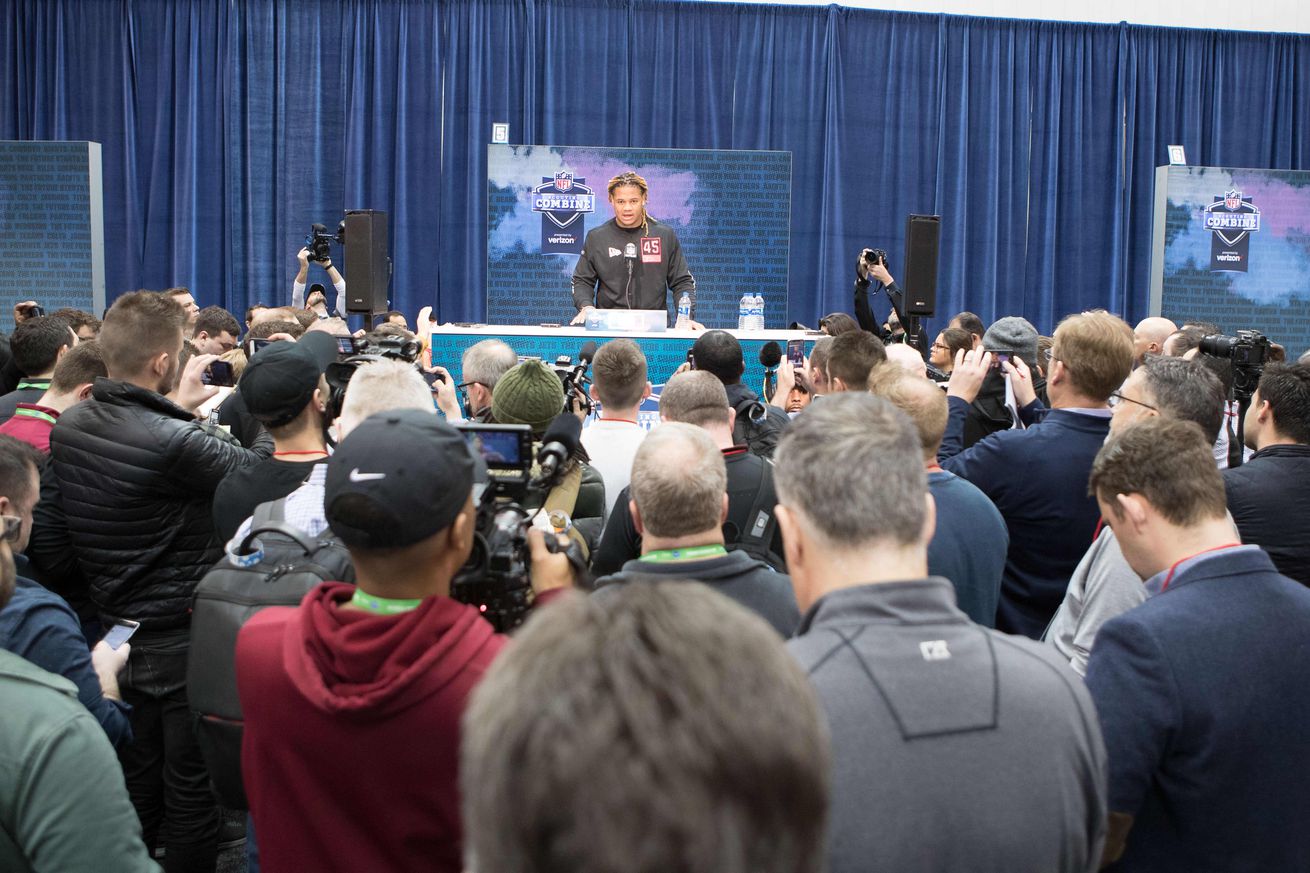 The 2020 NFL combine is moving to prime time for fans to watch all the testing.

For the first time, the NFL Combine will have their various testing events in prime time for the enjoyment of a larger viewing audience. With the new schedule, some may be tuning in to the Combine for the first time and may not be sure what to expect. If you fall into that category or have not been able to find a schedule for the event, BTSC is here to help!

All participants will perform six on-field drills regardless of position. With the exception of special team players, position groups will also have additional drills specific to their designated position. In all, 337 players were invited to the combine to showcase their talents. Some players may chose to skip some or all the drills either due to injury or their desire to perform them at their individual pro day.

Listed below is the schedule for this year’s NFL combine, which position groups are scheduled for each day, and the specific drills for each position.

Drills for all participants:

4 PM to 11 PM: On-field workouts for Defensive Linemen and Linebackers

2 PM to 7 PM: On-field workouts for Cornerbacks and Safeties 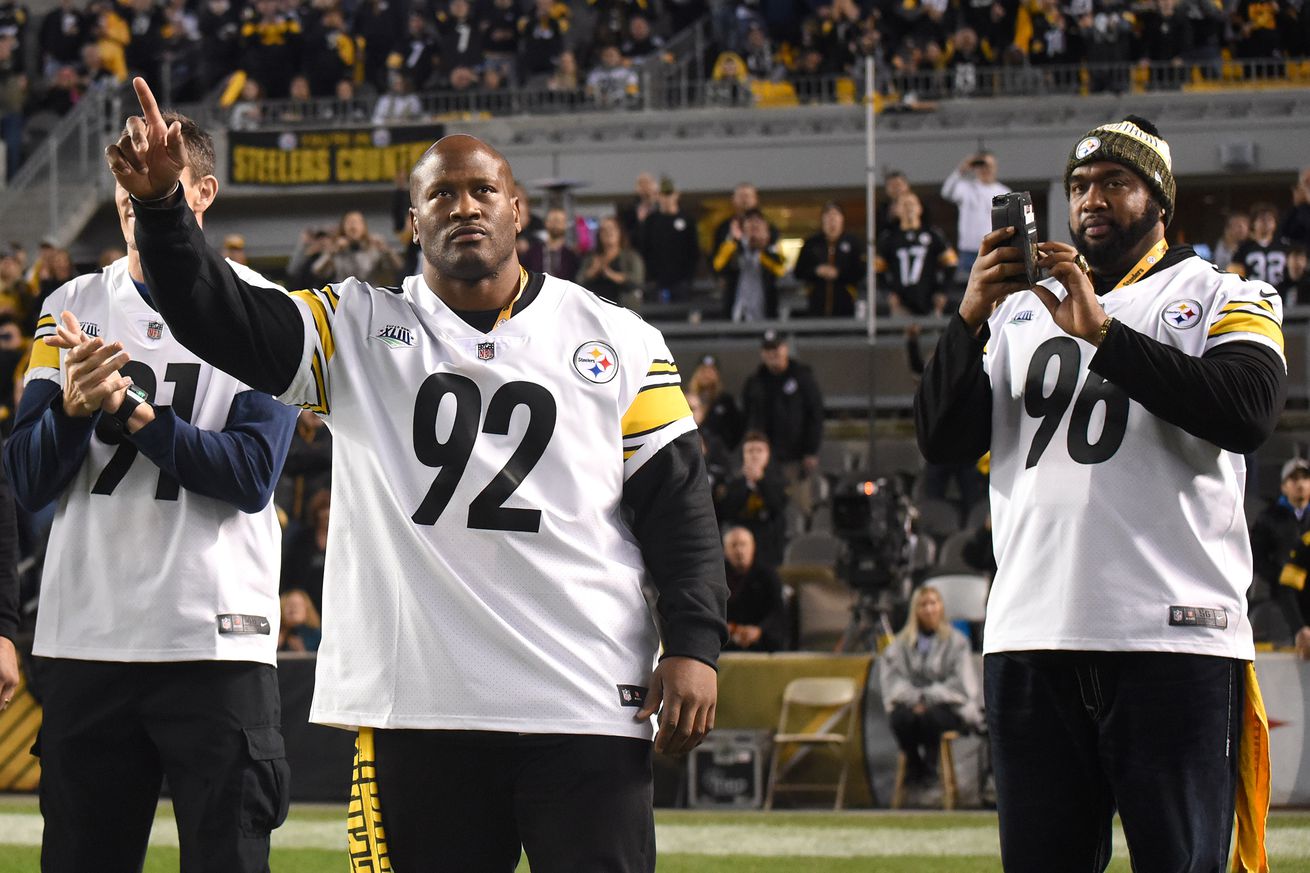 Time to check on the latest news surrounding the Pittsburgh Steelers.

The Pittsburgh Steelers 2019 season is officially over. After finishing the year 8-8, the Steelers, and their vast fan base, has another long offseason awaiting them. Just because the games are done doesn’t mean we stop providing you with features, commentary and opinions to tide you over throughout the offseason!

Today in the black-and-gold links article we take a look at how James Harrison, yes, Deebo, is not happy with the NFLPA and the labor negotiations.

Let’s get to the news:

Seeing as how he has been retired for two years, James Harrison doesn’t have a vote or formal say in the latest NFL collective bargaining agreement proposal. But as someone who was outspoken in his dislike for the previous terms between the league and its union, Harrison expressed a strong opinion against the proposed new one.

In a message posted to his verified Twitter account Thursday, the former Pittsburgh Steelers linebacker took aim at NFLPA executive director DeMaurice Smith and said the league’s offer to the union “shouldn’t have even been on the table!”

“The NFLPA has the WORST leadership under (Smith)!” Harrison wrote while quote-tweeting the NFLPA’s social-media announcement that its board of representatives sent the owners’ offer to full player membership for a vote. “The same person who gave us that terrible deal in 2011 (Steelers voted no) just tried the same thing in 2020! This deal shouldn’t have even been on the table! Do what’s best for the players or go work for the NFL!”

Tim Benz: How the Steelers should address the dirty little secret about their defense

The word “luck” wasn’t often used in connection to the 2019 Pittsburgh Steelers.

• The team lost the top two quarterbacks on the depth chart.

• The starting running back sat out six games and parts of four others.

• The perceived top wide receiver was sidelined for four games. The newly acquired free-agent receiver tried to play through a busted finger then got infected with a case of the “drop-rona virus.”

Aside from that, the Steelers offense was just chock full of good fortune last season.

So while the offense dragged itself to mediocre on its best days, the unit on the other side of the ball thrived.

It drew wide praise from a fanbase and media contingent excited to watch a ball-hawking, sack-producing, big-play-making defense in Pittsburgh once more.

Steelers G.M. looking for bright side to Scouting Combine changes

But they also know that the business side of the football business has created a new dynamic for this year’s Scouting Combine, so they know there’s only so much they can do.

Via Joe Rutter of the Pittsburgh Tribune-Review, Steelers General Manager Kevin Colbert tried to make the best of the switch to on-field drills switching to late afternoon and nighttime slots, when they used to begin around 9 a.m. The NFL made the change this year to create more television inventory, giving that precedence over the scouting function.

“Everything that is happening is new for all of us,” Colbert said. “Everyone has to adjust. It’s a bigger event. As you can see, it is growing at an unusual pace. We understand that, and we acknowledge that. But we also acknowledge that football is the most important thing we have to get done here. There’s a ton of medical business, football business, character business that we have to tend to while (the Combine) grows.

Before he was in Black & Gold, @benny_snell was RB 2️⃣4️⃣from the University of Kentucky.

LOS ANGELES — After suffering their worst loss of the season Friday, a brutal 132-103 beatdown by the LA Clippers at Staples Center, the Denver Nuggets were left reeling.

Nuggets coach Mike Malone called the team “soft.” And Nuggets guard Monte Morris said that if the team wanted to take the next step toward being a title contender, “we can throw it out the window if we ain’t going to show up in [these] games.”

While the game marked one of the Clippers’ most impressive performances of the season, it was also an eyebrow-raising defeat for the Nuggets, who entered as the No. 2 team in the Western Conference standings — one spot ahead of the Clippers.

“We were soft tonight from beginning to end,” Malone said. “They didn’t feel us on either end. They got whatever they wanted. We couldn’t run offense because they took

NEW ORLEANS — As he sat at his locker Friday night at the Smoothie King Center following a 116-104 victory over the Cleveland Cavaliers, Pelicans rookie Zion Williamson heard a stat from teammate Jahlil Okafor that he couldn’t believe.

Okafor told him how, after their game against the Golden State Warriors on Sunday, Williamson became the first player since Michael Jordan to have four consecutive games of at least 25 points while shooting at least 57% from the field as a rookie.

When a reporter later mentioned the stat to him at the postgame news conference, Williamson turned to Pelicans security officer Chico Robinson for confirmation.

“Chico, my name’s next to Michael Jordan?” Williamson, a Jordan Brand athlete, asked with a big smile.

After the stat was explained, Williamson said, “Wow, Jahlil was for real.”

MILWAUKEE — On the heels of James Harden‘s interview with ESPN’s Rachel Nichols — in which the Houston Rockets star appeared to take aim at Giannis Antetokounmpo‘s skill set — the reigning league MVP responded with a statement performance against the Oklahoma City Thunder on Friday night.

The Milwaukee Bucks‘ 47-point win was their largest of the season, 133-86, with Antetokounmpo going off for 32 points, 13 rebounds and 6 assists in just over 27 minutes.

He pushed his season total to nine games of posting 30 or more points in under 30 minutes, the most for a single season in the shot clock era since 1954-55.

“My game is not just power for sure,” Antetokounmpo said following the victory. “I came in when I was 18, I was 180 pounds, so to power through big guys was kind of tough.

MILWAUKEE — The Milwaukee Bucks staged another in a series of artful basketball exhibitions on Friday night at Fiserv Forum. Giannis Antetokounmpo padded his MVP résumé with skillful efficiency and gaudy athleticism (32 points, 13 rebounds, 6 assists in 27 minutes, before taking yet another fourth quarter off in a blowout). Of those 32 points, 28 came in the half court, and his plus-44 was the best mark of his career. Nobody makes the game look more effortless right now.

The Bucks whipped the ball around the floor with precision — gorgeous interior passes in the half-court, pinpoint pass-aheads on the break, weak-side reversals to open shooters. They rebounded a mystifying 91.2 percent of rebounding opportunities on the defensive glass while also draining a season-high 21 3-pointers.

This is not far off the norm for Milwaukee in recent months. The

Do I really have to break down this position like all the others? Well, if you say so …

Relief pitcher isn’t even so much a position in Fantasy Baseball as it is a vehicle for saves. Oh, but what about in Head-to-Head points leagues? There, it’s an opportunity to game the system with relief pitcher-eligible starting pitchers. So honorable, I know.

Other formats have tried to broaden the impact of relief pitchers with the introduction of holds, possibly even combining them with saves for one supersized category, but what good is that? The one thing that keeps the relief pitcher position interesting is the scarcity of players who can make a

Outfield, as you know, is actually three positions in one, with left field, center field and right field all merged together for ease of playability. It succeeds in that regard, but almost to the point of being too easy. A position usually takes on an identity, one that’s often tied to its distribution of talent or maybe some of the hiccups therein. But outfield is too vast to have any such quirks. It’s less a position than an expanse.

Everything you could possibly need from a hitter is here, but in larger quantities and spread throughout the entire draft. It’s where you’ll

My, how times have changed. The position once regarded as the weakest has now become the most star-studded of all.

Shortstop may not quite measure up to third base in terms of pure depth — and in leagues deeper than, say, 15 teams, the drop-off can be rather startling when it comes — but it’s close. And of all the infield positions, it’s the one that pops up most in the first two rounds.

It offers hitters of every sort, from sluggers to speedsters to perennial MVP candidates to up-and-comers with the tools and pedigree to add to its already impressive bounty. It’s another one of those positions where —

You may have heard that the 2020 draft pool is deep everywhere, with no position lacking in quality bats. Well, third base takes it to another level.

I’ve been ranking players for CBS Fantasy for more than a decade now, and I can’t recall a time I saw a position so deep — and not just in terms of players who could keep you afloat, but ones with impact potential. There are enough multi-eligible players here, spaced far enough apart in the draft, for you to form a lineup entirely of third basemen while still leaving enough on the board to meet the third base need of the 11

2020 NFL Scouting Combine, Day 3: Schedule, how to watch, streaming information and more
Black and Gold Links: James Harrison has been in the news lately after his lashing of the NFLPA
Malone rips Nuggets as 'soft' after blowout loss
Zion ecstatic to share rookie scoring feat with MJ
Giannis on Harden dig: My game 'not just power'