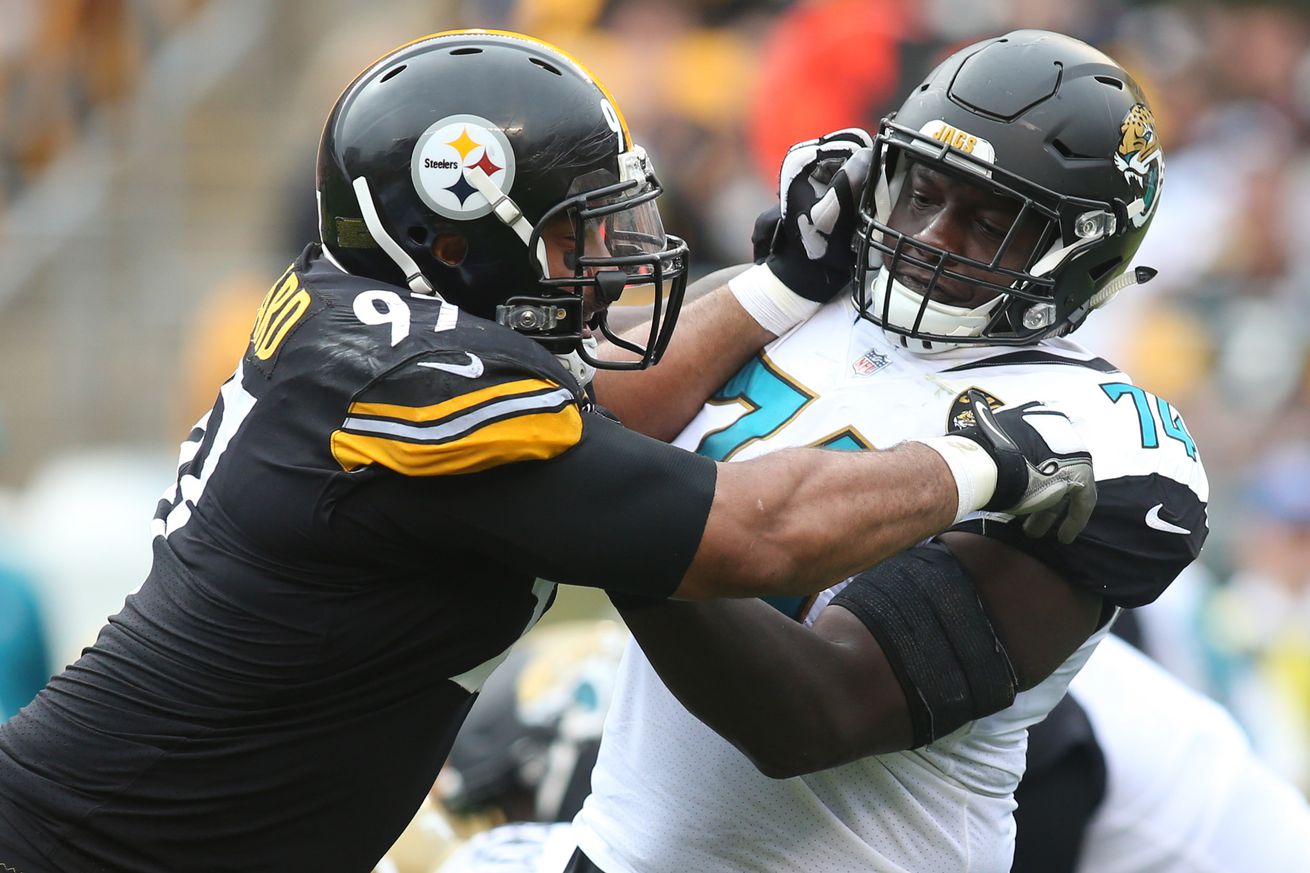 Time to check on the latest news surrounding the Pittsburgh Steelers.

The Pittsburgh Steelers 2019 season is officially over. After finishing the year 8-8, the Steelers, and their vast fan base, has another long offseason awaiting them. Just because the games are done doesn’t mean we stop providing you with features, commentary and opinions to tide you over throughout the offseason!

Today in the black-and-gold links article we take at how Steelers defensive end Cameron Heyward is willing to talk about a contract extension to remain with the Steelers for the duration of his career.

Let’s get to the news:

The Steelers often extend the contracts of key players when they have one year let on their existing deals, so defensive end Cam Heyward‘s situation will be one to watch this offseason.

Heyward has one year left on the contract he signed ahead of the 2015 season and he’s been a productive player throughout the life of that deal. Heyward was named a first-team All-Pro for the second time in three years and he’s recorded 29 sacks over the last three seasons.

Heyward said this week that he’d like to continue producing in Pittsburgh and “will be more than happy to facilitate” extension talks if the Steelers share that interest.

“June or July, but if we can get something done earlier, I would love it,” Heyward said, via Mark Kaboly of TheAthletic.com. “They’ve done right by me so far, and I want to continue to do them right. That’s what I love about Pittsburgh — you have to earn your way. If I play well and they show me love, I want to show love back. I want to make sure as them being my employer and them being my family, you always want to make sure that you represent your family well.”

Making a plan for next season

The Steelers defense had a a strong season and it’s evident with four defensive players taking part in Sunday’s Pro Bowl at Camping World Stadium, with Minkah Fitzpatrick, Cameron Heyward, Joe Haden and T.J. Watt on hand to represent the black and gold.

And with that crew together, it’s a chance for them to talk about the future and what the defense needs to do to help the team get back to the postseason in 2020.

And there is still a lot of growth for the defense as it’s a young group, with Fitzpatrick, Watt, Devin Bush and Terrell Edmunds a young core that meshes well with the veterans.

Fifteen men, some who have waited decades to hear their names called, were elected to the Pro Football Hall of Fame on Wednesday as part of its Centennial Class. The group was selected to honor the NFL’s 100th anniversary.

Here’s a closer look at the class:

A four-time Pro Bowl selection, the 6-foot-8 Carmichael was the league’s Man of the Year in 1980 for his work in his community. In an era when Drew Pearson once led the league in receiving yards with 877 in 1977, Carmichael was consistent in his impact, averaging over 15 yards per catch in six seasons.

Why he was elected: Carmichael was said to be one of the most difficult players to defend. Those who played against him said his numbers would be far better if he played now, when pass interference and defensive holding are called more often. He led the league in catches and receiving yards in 1973 and finished with three 1,000-yard seasons in his career. He was also among the league’s top 10 in touchdowns in eight seasons.

“It’s an honor to be here.”@minkfitz_21 speaks about being at his first #ProBowl, the 2019 season and building for the future. pic.twitter.com/BCbBR4wWqJ

“We’re just so motivated to go into next season.”@missi_matthews talks with @joehaden23 about working towards a better 2020 season, the respect he’s receiving during the #ProBowl and more. pic.twitter.com/yiIwI90bdV

.@_TJWatt speaks about using the #ProBowl as a learning opportunity, working with players from other teams, our defense and more following the first #ProBowl practice. pic.twitter.com/4s7FFUcPWo

‘He was simply one of the best guards that the NFL has ever seen.’@JeromeBettis36 speaks about how special #PFHOF20 Finalist @afan66 was on the field. pic.twitter.com/OUlvYiRvsa

NEW YORK (AP) — LeBron James is on his way to Philadelphia, set to pass Kobe Bryant on the NBA’s career scoring list in the former Lakers star’s hometown.

It’ll be another milestone achievement, but scoring has never been the most important thing to James. He prefers winning, and it looks like he’ll do plenty more of that with these Lakers.

James had 27 points, 12 rebounds and 10 assists in his 10th triple-double of the season and Los Angeles made a season-high 19 3-pointers to pull away and beat the Brooklyn Nets 128-113 on Thursday night.

James closed within 17 points of Bryant for No. 3 with a flurry in the fourth quarter. He can pass Bryant on Saturday at Philadelphia, where the five-time champion was born.

But if Curry’d had his way, he would have gone to the New York Knicks, not the Warriors, in the 2009 NBA draft.

“I wanted to go to New York and thought I was going to New York,” Curry said on Showtime’s “All the Smoke” podcast. “At the draft in the green room, I was like, ‘Oh, get to the eight spot and New York can get me.’

“And then I got the call from [former Warriors GM] Larry Riley, like ‘We’re going to pick you in the seventh spot.'”

“I wanted to go to New York and thought I was going to New York,” Steph Curry said. Andrew D. Bernstein/NBAE via Getty Images

The Wizards started slowly following a long flight after an OT defeat in Miami on Wednesday, but took over late in the first quarter and pulled away.

“My analytics guy tells me we’re 1-0 when we get in after 4 (a.m.),” Brooks said. “We played about as hard as you can play last night and we did it again tonight. It wasn’t easy. I’m tired and I was just coaching.”

Beal was 15 of 22 from the field and had eight assists in 29 minutes. The Wizards guard scored 38 points against Miami and is 31 of 46 from the field in

It’s time to split hairs and pick some All-Stars!

• I start from scratch and ignore the fan vote. It’s more fun to pick all 12 spots.

• I follow the same rules as fans, media and players in selecting starters: two guards and three frontcourt players. (I have an official ballot for starters.) Coaches have greater positional flexibility picking seven reserves.

• Availability and track record both matter. There is no hard-and-fast rule for how to apply each criterion. Every player debate is a little different given present-day performance, competition within the conference, and past accomplishments.

• The toughest dilemma is the second guard next to Walker, enjoying maybe the best shooting season of his career and driving with a head-down, north-south decisiveness that has him commanding Boston’s offense

The starters are set for the 2020 All-Star Game in Chicago. Now comes the fun part.

And while LeBron James and Giannis Antetokounmpo — both are reprising their roles as team captains — won’t be making their draft selections until Feb. 6, our panel of NBA experts is already answering the biggest questions surrounding the All-Star starter selections.

Who should be the No. 1 overall pick? Which players are our panel most excited to see team up Feb. 16 inside the United Center? How should the league tweak the selection process?

MORE: Everything to know for NBA All-Star 2020

1. LeBron is on the clock. Who should be his first pick in the All-Star draft?

Bobby Marks: The No. 1 choice is all about Luka Doncic. While the Dallas Mavericks guard missed out on being selected as captain, falling short by just more

Antetokounmpo and James earned the honors after leading their respective conferences in fan votes and will be two of the 10 starters for this year’s game, which will be held Feb. 16 in Chicago. They will next draft the rosters for the All-Star Game from the pool of players voted as starters and reserves in each conference.

James, who led all players in voting, was named to his 16th All-Star team, breaking a tie with Tim Duncan and Kevin Garnett for the

LeBron James of the Los Angeles Lakers and Giannis Antetokounmpo of the Milwaukee Bucks will be the captains for the NBA All-Star Game, just as they were last season. They earned the captaincies by being the top overall votegetters from the Western and Eastern Conferences, respectively.

The other starters for the Feb. 16 game in Chicago: Anthony Davis of the Los Angeles Lakers, Kawhi Leonard of the Los Angeles Clippers, Luka Doncic of the Dallas Mavericks, James Harden of the Houston Rockets, Pascal Siakam of the Toronto Raptors, Joel Embiid of the Philadelphia 76ers, Kemba Walker of the Boston Celtics and Trae Young of the Atlanta Hawks.

“For me, it’s always a blessing just being part of All-Star weekend,” James told TNT on Thursday night.

James, as the leading overall vote-getter, will have the top pick when

CHICAGO — The streets of Chicago surely will be jam-packed with celebrities and basketball junkies come NBA All-Star Weekend in three weeks.

On the court at United Center, this year’s threads will pay homage to the city’s popular alternative form of transportation — the transit line.

Jordan Brand and Nike designers have developed a concept to incorporate the eight lines of the train, known locally as the Chicago “L,” as the theme of each uniform color.

Red and blue jerseys will be used for the All-Star Game on Feb. 16, with Jordan Brand the official sponsor.

As a nod to the Chicago flag, the jerseys also will feature a six-pointed star with retro pinstripes similar to the alternate

The NBA schedule is still very much in feast or famine mode thanks to Monday’s massive Martin Luther King Jr. Day showcase. The league decided to play 14 games on Monday, and in the interest of limiting back-to-backs, that has essentially turned this into the season’s ultimate all-or-nothing week. We had 14 games on Monday, 12 on Wednesday and will have 11 on Friday, but had just one on Tuesday and are limited to three tonight.

A certain number of back-to-backs is a scheduling inevitability, so why not load this week up with them to ensure a sufficient and balanced supply of basketball for five days? It would certainly make tonight’s slate a bit more palatable, but given the constraints at play, here are today’s top picks for one of the lightest NBA nights of the year.

Black and Gold Links: Cam Heyward is willing and able to talk about a contract extension
LeBron has triple-double, Lakers pull away to beat Nets
Steph Curry was hoping to be drafted by Knicks
Beal scores 36 as weary Wizards down Cavs 124-112
Lowe's NBA All-Stars: 24 players and those who just missed